Lessons From an Eagle

Week 12 – Lessons from an eagle

Several weeks ago I saw an eagle sitting on the iced over cove here at Windermere. The eagle is such a pretty, majestic creature. 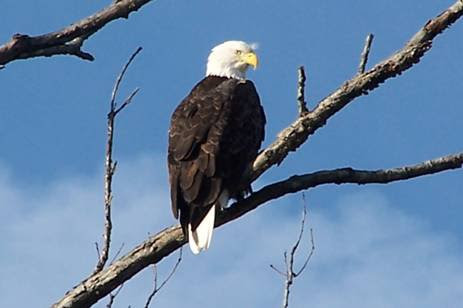 Although, only around 150 or so nesting pairs live year round in Missouri, literally thousands of the big birds winter here. The Missouri Department of Conservation says more than 2,500 migrating bald eagles spend most of the winter in the state, including about 100 or so that winter here near Bagnell Dam.

As I looked at the eagle, I recalled the passage from Isaiah 40: 28-31.  With the eagle as an illustration and Windermere on my mind, I felt like God was reassuring me of the future here at Windermere.

The promise of God brings excitement.

“v28 Do you not know? Have you not heard?
Yahweh is the everlasting God, the Creator of the whole earth.
He never grows faint or weary; there is no limit to His understanding.”

In verse 28, one can almost feel Isaiah’s excitement. There is no hesitation or doubt when he says, “Haven’t you heard? You may get tired but the Lord never tires. He is everlasting.” Just like the eagle at Windermere, our Lord circles but he is never exhausted. Our Lord has watched over Windermere for over 55 years…there is no end in sight.

The promise of God brings expectation.

“v29 He gives strength to the weary
and strengthens the powerless.”

Here Isaiah says the Lord Himself brings strength to those of us who are going through impossible assignments, or fear of failure. That eagle that I spotted may have stopped on the edge of the ice but he wasn’t tired. Here is the application for Windermere, we’ve been wearied by the stress and pain of constant criticism, but, our Lord has brought a renewal to our hearts. We expect God to show up and we deeply expect Him to change lives by the hundreds! We expect God’s power and grace to flood the camp every day.

The promise of God brings endurance.

“v30 Youths may faint and grow weary, and young men stumble and fall,
v31 but those who trust in the Lord will renew their strength;
they will soar on wings like eagles; they will run and not grow weary;
they will walk and not faint.”

Our Lord is a source of strength for the long term. When the eagle soars he looks like he could fly forever without flapping a wing. He is soaring. He is feeling for the warmer air that rises. The rising warm air is called a thermal. We can’t see thermals but the eagle feels for it and knows when it is time to soar. Something is stirring here at Windermere. We can’t see it. But, God is stirring. The time for Windermere to soar is now!

Our prayer: Thank you Lord for everlasting and inexhaustible strength for the long haul.